In what looks like a small village in Bengal, a group of ‘humanists’ have gathered to distribute food rations to the poor.  A man begins reading names from a list. One by one, the poor people of the village come up and collect their humble sack of grain. Hard times also bring out the best in the human spirit.

All of a sudden, the man with the list stops. He has noticed that certain persons have also joined the back of the line to receive food. He raises his voice and tells them to go away.

Terrorism has no religion. But hunger certainly can. Anyway, I digress.

For now, you might be relieved to learn that this is happening in some village in East Bengal, now called Bangladesh. No such reports from West Bengal. At least not yet.

Borders are a funny thing, especially when drawn arbitrarily across a nation as ancient as Bharat, tearing it into pieces. We can pretend that this video does not matter simply because it is from Bangladesh and not from any part of the Republic of India. We can close our eyes. Or we could see it as a warning about the grim future of those who will not learn from history. The obsessively India hating Arund**ti Roy is right about one thing. The pandemic is a portal. But not in the way she wants us to believe. Through this time portal, we can see what lies on the other side of this tunnel called “Ganga Jamuni Tehzeeb.”

In the last two months, the world has been in the throes of the Wuhan Coronavirus pandemic. And a great crime against humanity has gone unnoticed. Pakistan and Bangladesh have been using this pandemic to starve their Hindu minority. 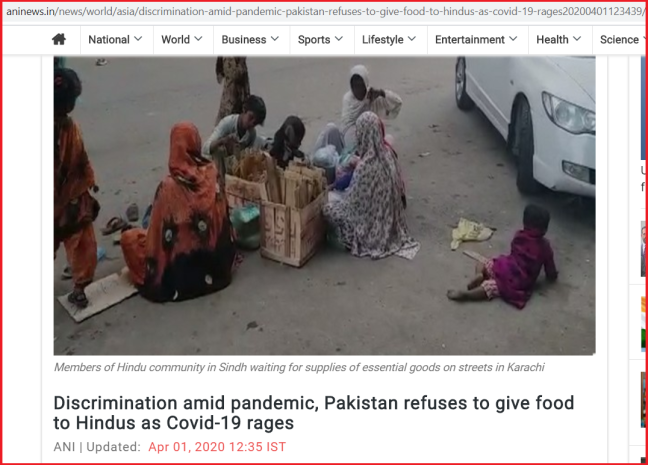 Do not believe even for a moment that the world is merely distracted, too busy looking at other things to care about a handful of people in a poor country. If media has time and space for silly articles suggesting that saying “Bharat” instead of “India” could be a conspiracy against the world, they surely have time to cover what’s happening to Hindus in Pakistan or Bangladesh. The poison drip of Hinduphobia in the Western media has been up and running as if nothing has happened. A random hospital in India becomes the target of a fake story accusing India’s Hindu majority of ‘intolerance’. The story is flashed around the world in a matter of hours.

And it’s not like the world cared about Hindus in Pakistan or Bangladesh when things were ‘normal’.

The world is looking away from the plight of Hindus and deliberately so.

The interesting question is why Hindus of India also seem to be looking away, at best only vaguely aware of what is happening just across the border.

Why then does the Indian liberal keep telling these lies? One part of it is a simple profit motive. There is a real desire out there to believe the worst about India. This is in countries which are insecure about India rising to the top 5 of world economies and demanding a place at the power table. And where there is a demand, there is always someone willing to sell. Even if it means selling out their own country. The world is a nasty place.

But the real motive goes beyond that. These lies serve a specific purpose. They keep Hindus on the defensive. Unable to see what’s really happening to them. Unable to see how Hindus are being sent on a one way journey out of history. And definitely unable to hear the screams of Hindus across the border in Pakistan and Bangladesh. They are not spirits of the dead calling out to us from the other side. They are living breathing human beings. We have just learned to behave as if they are already dead.

Remember, every moment that we spend defending against liberal attacks on Hanuman stickers, or sarees, or rasam, is a moment we don’t see the big picture of what is happening to us.

Liberals know perfectly well that sarees have nothing to do with so called Hindu nationalism. They are just baiting us, making us thrash around, tiring us out. When we focus our minds on small things, we miss the big picture. That’s their real strategy.

If one billion Hindus in India spoke up in one voice about what is happening to Hindus in Pakistan, would the world still be able to ignore it? Of course not. That is why they pull our leg, keeping us busy debunking absurd allegations of fascism and intolerance.

On CAA, for instance, they make us repeat over and over again, the same easy justification in favor of the law. They are not actually listening. They are buying time. With each passing day, Hindus in Pakistan and Bangladesh come one step closer to extinction. And we are one day late in realizing what could be coming to us.

All blog posts written on the website dynastycrooks.wordpress.com are written for personal entertainment of the author only. The author does not vouch for the veracity of any statements made in the posts because the entire content of blog posts on dynastycrooks.wordpress.com is for entertainment purposes only and written in the spirit of websites like FakingNews.firstpost.com or TheUnrealTimes.com. As such, nobody should form any opinion of any person, living or dead, based on the content of these blog posts or the comments below.