This is a very crucial piece of news that has escaped notice among all the reporting around Wuhan Coronavirus.

Quick refresher for whom the name “Sheikh Mujib” may not ring a bell. Sheikh Mujibur Rahman (known most commonly as Sheikh Mujib) is the founder of Bangladesh. He was the leading light in the struggle against the Yahya Khan regime in Pakistan. When India liberated Bangladesh in 1971, Sheikh Mujib became Prime Minister.

However, Sheikh Mujib did not last very long as Prime Minister. About three years into his term, he was assassinated by a group of conspirators, among them members of his own party as well as the Bangladeshi military.

Suffice to say that a coup like this does not occur naturally, especially during Cold War times. Suffice to say that this was a huge blow to India’s interests in the region. And it is probably not hard to guess which superpower would have wanted to hurt India at the time.

Following the assassination, utter confusion prevailed in Bangladesh for a while. Coup and counter coup. Some assassins were exiled, but some were actually promoted in army rank as a reward. However, after various twists and turns, the assassination came to be finally recognized as a crime. And several of the assassins were convicted “in absentia” (because they were missing) and sentenced to death.

So why are we talking about this today?

Because two very significant developments have happened in the last one month. The first is the hanging of Abdul Majeed in Dhaka on April 12. 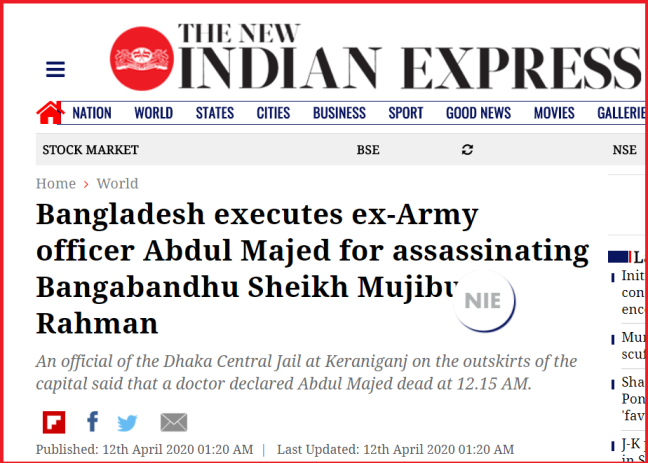 The chilling part of the article is this:

“A prosecution lawyer said Majed told the court that he returned to Bangladesh on March 15 or 16. The convict, he said, claimed he managed to live secretly in Kolkata for the past 23 years.”

23 years! An assassin from Bangladesh had been living comfortably in Kolkata. He didn’t even flee to a distant country. He assassinated India’s big ally and then fled to India itself! He didn’t even go to Pakistan which would probably have welcomed him, as per their stated national policy of welcoming all terrorists.

Can you imagine how humiliating this is for India? He has made our borders look like a joke. He has made a mockery of our enforcement systems and ID cards. If he lived 23 years in Kolkata, chances are he helped himself to everything from bank account, to phone connection to Aadhar card.

By the way, when I first became aware of this story, I scanned news reports carefully to understand how he managed to be in Bangladesh again. Did our government arrest and hand him over? Did he go of his own accord? What could he possibly want to do in Bangladesh again?

Interestingly, this part seems shrouded in mystery. Nobody is clearly explaining what happened. As you can see, Bangladesh was in great hurry to execute him as soon as caught. They say they got their hands on him on March 16 and they have already hanged him on April 12. You may now come up with whatever fun conspiracy theory catches your fancy.

More is known about the case of Risaldar Moshleuddin, another of the killers.

India handed him over to Bangladesh a few days ago. As per reports, he had been running a medicine shop in Bongaon in West Bengal for over two decades!

Caught in the space of one month. Two “most wanted” fugitives who had been living a quiet life in West Bengal for over twenty years.

Well, this is embarrassing.

Obviously, not every infiltrator from Bangladesh is a most wanted fugitive. But this episode surely does show how easy it is to break Indian laws and sneak into our country. And worse, how it is to stay in our country illegally. In the last 15 years, India has tightened so many regulations. Beginning with the simple KYC for opening and operating bank accounts. Then, there were stringent ID requirements for obtaining phone connections. And then came Aadhar, which was linked to pretty much everything. And yet none of these people were caught in the net.

Swarajya reports that the men even had voter cards and passports. Disaster!

The episode underscores both the difficulty and the importance of the NRC exercise. These people had documents! There are likely lakhs of Bangladeshi infiltrators who have managed to do the same. How are we going to design an NRC requirement that catches these folks while not bothering genuine Indians?

On the other hand, we absolutely need to get this done. Otherwise, whatever little of Bengal remains on the Indian side will be gone as well. We will end up with a national anthem written by someone who will become a foreign author in what will become a foreign language. Like Sind, our kids will wonder where is this “Banga” that the song talks about. Imagine that.

8 thoughts on “Can you believe that two of Sheikh Mujib’s killers were hiding in West Bengal?”

All blog posts written on the website dynastycrooks.wordpress.com are written for personal entertainment of the author only. The author does not vouch for the veracity of any statements made in the posts because the entire content of blog posts on dynastycrooks.wordpress.com is for entertainment purposes only and written in the spirit of websites like FakingNews.firstpost.com or TheUnrealTimes.com. As such, nobody should form any opinion of any person, living or dead, based on the content of these blog posts or the comments below.